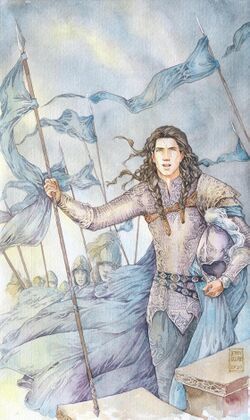 Utúlie'n aurë! was the cry of Fingon during of the Fifth Battle of Beleriand, when he saw the armies of his brother Turgon.

Then when Fingon heard afar the great trumpet of Turgon his brother, the shadow passed and his heart was uplifted, and he shouted aloud: Utúlie'n aurë! Aiya Eldalië ar Atanatári, utúlie'n aurë! The day has come! Behold, people of the Eldar and Fathers of Men, the day has come! And all those who heard his great voice echo in the hills answered crying: Auta i lómë! The night is passing!

The result of the following battle was totally tragic: Fingon died and Turgon only could run away after the Men of the House of Hador sacrified themselves. However, the hope of the first battle cry was echoed by Húrin Thalion when he remained as the last standing fighter, shouting: Aurë entuluva! Day shall come again!.[1]