The Variags came from Khand, a land southeast of Mordor.[1] It is not clear if the Variags are synonymous with the "men of Khand" in general, or if they are a specific group or tribe of those men. Records in Gondor mention "peoples of Khand"[2] and it is known that the land of Khand was inhabited by Variags.[3]

In the Third Age the eastern Wainriders had been spreading southward beyond Mordor and were in conflict with their neighbours further south, the peoples of Khand. Later Sauron arranged a peace and an alliance between the Wainriders and the peoples of Khand and prepared an attack on Gondor, that should be made at the same time from the north and from the south. In T.A. 1944 the Wainriders and the "men of Khand" mustered a great army on the southern shores of the Sea of Rhûn and moved as fast as they could along the northern side of the Ered Lithui and defeated the northern army of Gondor in a battle north of the Morannon[2] and killed King Ondoher and both his sons, Artamir and Faramir.[4] Afterwards they pursued the withdrawing survivors of the northern army of Gondor into the north of Ithilien, defeated the reargurad of the northern army of Gondor and killed the new commander of the northern army of Gondor, Minohtar, the son of the sister of King Ondoher.[2] They believed that they had defeated Gondor, set up a camp and feasted and revelled, but Eärnil, the Captain of the Southern Army, who had destroyed the army of Harad that had crossed the Poros moved north with the Southern Army as quickly as possible, gathered the retreating Northern Army of Gondor, defeated the Wainriders in the Battle of the Camp and drove the surviving enemies into the Dead Marshes where a great part of them perished.[4][5]

During the War of the Ring the Variags fought at the Battle of the Pelennor Fields[6] on 15 March T.A. 3019.[7] They were held in reserve in Osgiliath along with armies of Easterlings and Southrons. After the death of the Witch-king they were sent onto the battlefield by Gothmog. Their ranks were among troll-men and Orcs when the knights of Dol Amroth ran and drove them back.[6]

The meaning of the name Variags is unknown.

A draft version of what would later become appendix F mentions that the name Variag is a word from the speech of Men of the East and allies of Sauron.[8]

In the Russian chronicle of Nestor the name Variags is used for the people, which are usually named Varangians and which were Scandinavian rovers that overran parts of Russia and reached Constantinople in the 9th and 10th centuries. A group of Varangians formed the Varangian Guard of the Byzantine Emperor.[9]

It has been suggested that Tolkien adopted the Slavic term to indicate that the Variags were possibly mercenaries serving a possible Lord of Khand.[10] 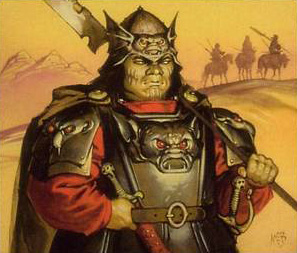 Variags, who speak the tongue Varadja, share ties with both Easterlings and Haradrim.[11][12] 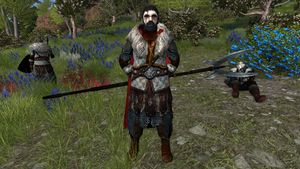 A group of Variags in The Lord of the Rings Online

The Variags are first encountered as enemies in Far Anórien, guarding the road to Minas Tirith against the passage of Rohirrim. Another group of Variags is found in North Ithilien after the Battle of the Pelennor Fields, attempting to retreat home into Khand. Unlike the Easterlings and the Haradrim, the Variags are mercenaries, following Sauron not out of fear or worship but because of the riches promised to them. As such, they hold no real hatred against the Men of the West and at several points players have the option to simply pay them to defuse an armed situation.