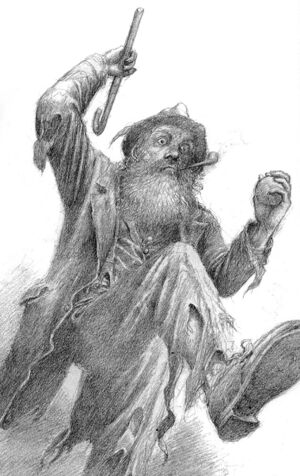 Artaxerxes is the wizard, and main antagonist, in Roverandom. Artaxerxes is described as an old man in ragged trousers wearing a green hat with a blue feather.[1]:1 Originally from Persia, he ended up in Pershore by mistake.[1]:14

After Artaxerxes picks up Rover's yellow ball, Rover demands it back without saying "please". Rover bites Artaxerxes trousers when he continues to refuse to return the ball; in retaliation, Artaxerxes turns Rover into a toy dog and transports Rover to a toy shop.[1]:1-2 Although Rover visits the Man-in-the-Moon with the help of Mew, and seeks the help of the sand-sorcerer Psamathos Psamathides, the great whale Uin takes Roverandom (as he is now known) to ask Artaxerxes to return him to being a normal dog.

Artaxerxes is living at the bottom of the Deep Blue Sea and is married to the daughter of the Mer-king. As a wizard, he has been appointed Pacific and Atlantic Magician and is known as PAM. All the woes of the mer-people are blamed on PAM, including the emergence of a Sea-serpent. Because he is so deeply unpopular, PAM leaves with his wife and Roverandom: he takes Roverandom with him as the dog continues to be polite and show faith in his magical abilities.[1]:55 ff

Back on land, Artaxerxes turns Roverandom back into a real dog. Wearing a purple velvet suit, Artaxerxes sets up a chocolate and cigarette shop by the beach (selling Pam's Rock), whilst his wife gave swimming lessons.[1]:83-7

Artaxerxes is the name of five Kings of Persia.

Hammond and Scull note that the abbreviation for Pacific and Atlantic Magaician, PAM, is the same nickname that was given to former British Prime Minister Lord Palmerstone.[1]:109