Goldberry, the "River-daughter", was the wife of Tom Bombadil. 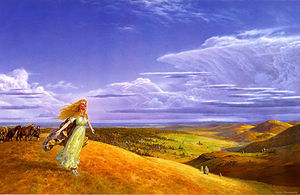 "Beyond the Old Forest" by Ted Nasmith

Although her origins are uncertain, it has been speculated that she is a river-spirit of the river Withywindle. Otherwise, she and Bombadil are enigmas.[1]

According to the Bucklandish poem The Adventures of Tom Bombadil, Goldberry was in the Withywindle when she pulled Tom by his beard under the water-lilies out of mischief, but he ordered her to let him free. The next day he came to the River-woman and asked Goldberry to be his wife, and the creatures of the Old Forest (the badger-folk and other animals) attended their wedding.[2]

In T.A. 3018 Tom Bombadil travelled to the lower reaches of the Withywindle to gather white water-lilies for her, and it was while returning from a lily-gathering expedition that he discovered Frodo and his companions, and rescued them from Old Man Willow.[3] Goldberry seems to have used her lilies to recreate her original home in the river: when Tom brought the Hobbits back to his house, they found a seated Goldberry surrounded by water-lilies floating in pots of earthenware.[4]

Goldberry welcomed and tended the travellers to their home. The hobbits thought of her as a beautiful and calm being, with a beauty resembling an Elf but less exotic to their hearts. Her voice was described as "the song of a glad water ... coming down like silver". The hobbits would listen to her sing in a voice like rain, and they would imagine rivers and pools.

Tolkien wrote about Goldberry that she "represents the actual seasonal changes in [river-lands]."[5]

In her first appearance in the poem, she is displayed as a typical mischievous water-sprite, responsible for pulling and drowning humans into rivers and lakes.[6]

Because adaptor Terence Tiller thought the age difference between Bombadil and Goldberry was too big, he made them father and daughter.[7] Tolkien thought little of the change.[8] No actress is credited specifically for the part, though Nicolette Bernard is the only female in the episode's cast list, making it likely she voiced Goldberry.[9]

Goldberry is played by Donata Höffer.

Sorcha Cusack played Goldberry in the episode "The Adventures of Tom Bombadil".[10]

Goldberry is present in the final third of the first episode, along with her husband Tom Bombadil. Unlike Tom (played by Milan Lasica), Goldberry has no spoken lines, and she is only heard singing harmoniously as Tom and his four hobbit guests arrive at his house. Goldberry's briefly heard singing vocals seem to be portrayed by Soňa Norisová (similar to vocals also used elsewhere in the series), but the actress or singer is uncredited.

Although Goldberry does not appear in The Lord of the Rings film series, Decipher produced a card for the character. She was portrayed by Amanda Niel.

Goldberry appears at the house of Tom Bombadil. One of the tasks the player has to accomplish is bringing collecting water-lilies for Tom and Goldberry. She is voiced by Kath Soucie.[11]

Goldberry can be found at Goldberry's Spring in the Old Forest.[12] Goldberry's role in the game is very minor: she is only involved in two quests and only has a few lines in both. Her origin however, is greatly elaborated upon: she is a River-maiden, a spirit that watches over the streams and rivers. Goldberry's sisters can be found in the Lone-lands, Nenuial, the Gladden, Gilrain, Serni and Erui. Some show themselves openly, others are secretive and only reveal themselves to the Wise and the descendants of the Númenóreans who had known of River-maidens in the years of old. But some were driven mad by the bloodshed spilled over their waters, or slain and devoured by the servants of the Enemy who then take on their fair appearance.