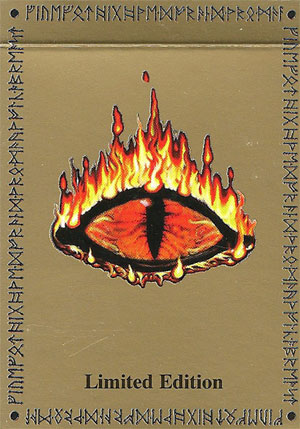 Middle-earth: The Lidless Eye (MELE), released in 1997, was the second basic set of the Middle-earth Collectible Card Game. MELE adds the possibility to play as a Ringwraith of Sauron and arguably makes the game more complicated with all sorts of support and effect cards.

MELE was sold in starters and boosters (no cards from other sets needed to play). A booster (15 cards, 36 boosters per display) holds 1 rare, 4 uncommons, and 10 commons. A starter holds a fixed set (you can choose), an equivalent of 3 boosters, and 7 extra commons.

Middle-earth: The Lidless Eye is an intriguing card game, designed for 1 to 9 players, who design their own unique decks. You play one of the nine Nazgûl, the shadowy Ringwraiths of in the service of Sauron, the Evil One. Influence minions, who form companies and perform missions or undertake quests on your behalf. Journey afar - struggling with a host of hazards and the dangers of death and corruption. Gather resources, including allies, factions, artifatcs, and lore. Compete with other Ringwraiths to do the most to strengthen the cause of the Lord of the Rings!