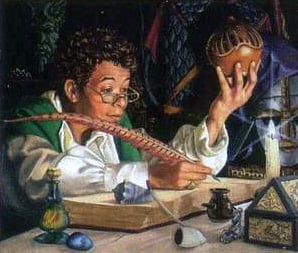 Mathoms was an old word of the hobbit-dialect, not recorded as being in use outside the Shire. It was used to refer to "trinkets" or any item that had no particular immediate use.

Mathoms were many of the presents that passed from hand to hand by the Shire-hobbits - an important part of their culture - and whose owners did not wish to throw them away. Hobbit houses tended to be crowded with mathoms.

Many mathoms were weapons, useless as there hasn't been any conflict since the Battle of Greenfields (S.R. 1147); weapons were seen mostly as trophies, ornamenting walls or hearths, or stored in the Mathom-house, a "museum" in Michel Delving.[1]

It is used as a rendering of the original Hobbitish word kast.[3]