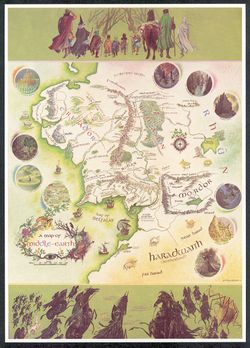 A Map of Middle-earth (name on map), also known as the Pauline Baynes Map, is a poster-map of Northwestern Middle-earth published in 1970 by George Allen & Unwin.[1]

Based on the map of Middle-earth first published in 1954, the poster-map (created in 1969) was a collaboration between Pauline Baynes and J.R.R. Tolkien. Tolkien corrected a few errors on the original map,[source?] and supplied some additional place names and notes on nomenclature.[2][1][3]

"New" locations include: Dorwinion, Eryn Vorn, Andrast, Drúwaith Iaur, Undeeps, Tumladen; the towns Framsburg, Edhellond, Lond Daer; and the rivers Adorn, Glanduin and Swanfleet (labelled as a river). Other additions include wooded areas in Eryn Vorn, Enedhwaith and around the river Isen, not indicated as such in earlier maps. The "Éothéod" are also labelled, indicating their original homeland (near Gundabad).

The name of the Grey Havens is labelled, but unlike in the earlier maps, their location is not indicated with an icon. Sarn Ford is labelled simply as "Ford". The Sea of Rhûn is now all occupied by water, whereas the earlier (as well as the later) map by Christopher Tolkien indicated that it contained an island.

Ballantine Books reproduced the map on the box of a set of a three-volume edition of The Lord of the Rings (first printing 1970).[4]

The first print of the map had several mistakes, some being misreadings or misunderstandings of Tolkien's notes, and were brought to the attention of Christopher Tolkien. One mistake was the label of "R. Swanfleet" as a lower part of R. Glanduin. Later printings of the map corrected such mistakes, including those of the original book map by C. Tolkien.[6]

After the 7th impression, but not later than the 12th impression, a green border 17 mm high was inserted between the top and bottom edges of the map and the illustrated borders.[2]