The Éothéod were a race of Northmen who flourished near the Vales of Anduin and later in northern Mirkwood from around T.A. 1856 to 2510. They were faithful allies to Gondor, and eventually were the ancestors of the Rohirrim.

After the Battle of the Plains (T.A. 1856), the Kingdom of Rhovanion was subjugated by the Wainriders and its people were enslaved. To escape this fate, many of the Northmen fled Rhovanion; some north to Dale, others south to Gondor. Marhwini, son of Marhari, led one such band of refugees north between the eastern bank of the Anduin and the western eaves of Mirkwood. Along the way they were joined by additional fugitives who had fled through the forest. They ended their journey in the Vales of Anduin between the Carrock and the Gladden Fields, where they settled for the most part on the west side of the river. There they became known as the Éothéod.[1]

These migrations happened outside the knowledge of Gondor, who learned about their existence many years later. That was until around 1899 when Marhwini warned Calimehtar that the Wainriders were plotting to raid Calenardhon over the Undeeps. But the enslaved Northmen also prepared a revolt against the Wainriders. Calimehtar therefore provoked the Wainriders out of Ithilien, and his horsemen, joined by a large Éored led by Marhwini, drove the Wainriders back. Meanwhile outlaws and roused slaves from Mirkwood burned many Wainriders settlements. Marhwini retired to his land beside the Anduin, and the Northmen of his race never again returned to their former homes.[1]

In the time of Forthwini, the Éothéod were troubled again by raids into the south of their land, both up the river and through the Narrows of Mirkwood. The Lord of the Éothéod then warned King Ondoher that the Wainriders were recovering. The attack finally came around 1944 and men of the Éothéod fought with Ondoher. Faramir son of Ondoher refused to remain in Minas Tirith and joined a battalion of Éothéod but was caught with a party of them as they retreated towards the Dead Marshes. The leader of the Éothéod did not manage to save him and Faramir died in his arms, before he found out that he was the Prince. He then went to join Minohtar at the head of the North Road in Ithilien. Eventually the Wainriders were defeated by Earnil II at the Battle of the Camp.[1]

In T.A. 1973 some proud "princes of the Northmen" and tall and fair riders on special horses from the Vales of Anduin, joined the Gondorian forces and formed the Host of the West and fought against Angmar.[2][note 1]

The Éothéod were now well-known to Gondor as a people of good trust. Having established contact, the historians of Gondor compiled their knowledge about all that had passed in the far northern region. 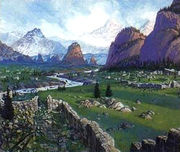 Two years after the fall of Angmar (1975) Lord Frumgar led the Éothéod to a new land north of Mirkwood,[3] between the Misty Mountains and the Forest River away from the ravages of the Easterlings and Orcs. Southward it extended to the confluence of Greylin and Langwell sources of the Great River Anduin, near where the Ered Mithrin met the Misty Mountains.[1] This land was known as Éothéod[4] They founded their capital there.

Some time later their king Fram, son of Frumgar, slew the dragon Scatha. The Éothéod capital was named Framsburg in his honour.

After Fram nothing is known of the leaders of Éothéod until much later time, when king Léod was killed trying to tame the horse Felaróf, first of the Mearas of Rohan. His son and successor Eorl the Young tamed the horse, taking it into service as compensation for his father's life. During the rule of the ruling Steward of Gondor Cirion had always in his mind the menace from the North. It was thus not until the winter of T.A. 2509 was past that he became aware that a great movement against Gondor was being prepared. Gondor faced an attack by the evil Balchoth, and Cirion sent messengers to the Éothéod capital. King Eorl answered the call for help, and rode out with most of the Éothéod to help their allies of old, leaving only a few warriors behind to protect his people. The Riders arrived just in time to help the army of Gondor at the Field of Celebrant, and after defeating the enemy Cirion asked the Éothéod to watch over the depopulated province of Calenardhon.

Three months later Cirion gave Calenardhon as a gift to Eorl and his people, and Eorl swore his Oath of eternal friendship. Messengers were sent north, and the Éothéod completely removed to the plains of Calenardhon.

The Éothéod renamed themselves Eorlingas or "followers of Eorl", but in the language of Gondor they became known as the Rohirrim, or Horse-lords, and their country became known as Rohan, the Riddermark.