Minas Tirith (S. 'Tower of the Guard') was a city of Gondor, originally called Minas Anor. From T.A. 1640[2] onwards it was the capital of the South-kingdom and the seat of its Kings and ruling Stewards.

The city of Minas Tirith was originally a fortress, Minas Anor (S. 'Tower of the Sun'), built in S.A. 3320 by the Faithful Númenóreans.[1] It was the western counterpart to Minas Ithil (S. 'Tower of the Moon'): guarding the western flank of the city of Osgiliath from the men of the White Mountains, as Ithil guarded its east from Mordor. From Osgiliath the sons of Elendil jointly ruled the newly-founded South-kingdom, but Minas Anor was home to Anárion's House and Minas Ithil to Isildur's.[3] Therefore when the seven palantíri were divided amongst the Realms in Exile one was placed in Minas Anor.[4][5]

Sauron attacked Gondor in S.A. 3429, taking Minas Ithil and forcing Isildur to flee north to his father in Arnor. Anárion meanwhile was besieged in Osgiliath and Minas Anor,[1] until he was relieved by the Last Alliance of Elves and Men. In T.A. 2 Isildur planted the second White Tree of Gondor in Minas Anor in memory of his brother, who had perished during the Siege of Barad-dûr. From this point the Kingship of Gondor belonged solely to the heirs of Anárion, who continued to rule from Osgiliath.[2][6]

In T.A. 420[2] Minas Anor was rebuilt by Ostoher, the seventh King of Gondor, and his from his reign onwards the Kings removed there from Osgiliath in the summer.[4] It remained the second city of Gondor for the next thousand years as the Kingdom reached the height of its power under the Ship-kings, and then fell into its long decline. Osgiliath was burned and its palantír lost during the Kin-strife, and from this point Minas Anor gradually grew more prominent. In T.A. 1636 the old capital was devastated by the Great Plague, leaving it depopulated and falling into ruin. Soon after Tarondor permanently moved the King's House to Minas Anor (T.A. 1640).[4][2]

For a short time under Tarandor and his heirs the decline of Gondor was slowed, although constant wars with various groups of Easterlings took their toll. In T.A. 1900 Calimehtar built the first White Tower in the Citadel of Minas Anor to house the city's palantír.[2] Just over a century later, however, the kingdom was dealt a harsh blow. In T.A. 2002 Minas Ithil, where the guard on Mordor had long since slackened, was captured by the Nazgûl. It became known as Minas Morgul, and in turn Minas Anor was renamed Minas Tirith, 'Tower of the Guard' or the 'Guarded City'.[7] Soon after Eärnur, the last King of Gondor, was killed in the Morgul Vale, and the lordship of the South-kingdom passed to the Stewards.[4] 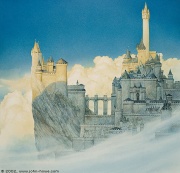 "Minas Tirith" by John Howe
Following a brief respite in the Watchful Peace, Gondor under the Stewards became increasingly beset by enemies: control of Ithilien and the ruined bridges of Osgiliath passed back and forth between Minas Tirith and Minas Morgul,the coastlands were raided by the Corsairs of Umbar, and Easterlings assailed them from the north.[4] The Citadel was improved under Ecthelion I (T.A. 2685–2698),[4] who rebuilt the White Tower which afterwards bore his name.[2] But equally the White Tree died at the same time as the twenty-first Steward, Belecthor II, and this time a new seedling could not be found to replace it.[4]

In the reign of Ecthelion II (T.A. 2953–T.A. 2984)[4] Minas Tirith was strengthened against Mordor, where Sauron had now declared himself openly. It was at this time that Aragorn the future King first came to the city under the name Thorongil, and did great deeds.[4]

During the War of the Ring, the brunt of Mordor's assault on the Free peoples was directed at Gondor and Minas Tirith. Cair Andros fell on 10 March T.A. 3019 and on 12 March a company led by Faramir was forced to retreat from its defence of Osgiliath.[2] An effort was made to repair the Rammas Echor, but this came too late.[7] With the crossings of Anduin taken the Pelennor was overrun, and Minas Tirith was besieged by a great army of Morgul orcs and Easterlings led by the Witch-king. The city was under-manned, and its defenders had little hope; on 15 March the Great Gate was breached and the last ruling Steward, Denethor II, burned himself in despair.[8][9] But Gandalf was also present, and rescuing Faramir from his father he took charge of the defence of Minas Tirith. The Rohirrim under Théoden also came unlooked for to the city's aid, and Aragorn led a force up the river from Pelargir. Seeing this Imrahil, Prince of Dol Amroth, led a sally from the city, and the three armies were able to break the siege in the decisive Battle of the Pelennor Fields.[10]

On 1 May T.A. 3019, returning with the victorious from the Battle of the Morannon, Aragorn was crowned on the plain outside Minas Tirith, and he entered the city as King Elessar. On 25 June he discovered a sapling of the line of Nimloth in a hidden hallow of Mount Mindolluin. This was planted in the Court of the Fountain – the fourth White Tree of Gondor.[11][2]

Under King Elessar Minas Tirith was rebuilt and restored: the Great Gate was remade in mithril and steel, the streets were repaved with white marble and gardens and trees were planted all around the city. This labour was aided by the Dwarves of the Glittering Caves, led by Gimli, and Wood-elves brought there by Legolas.[11] 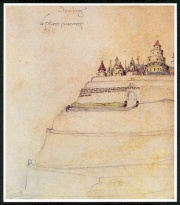 Minas Tirith was situated on the Hill of Guard – the "out-thrust knee" of Mount Mindolluin, connected to the main mass of the mountain by a narrow 'shoulder'.[7][12] It faced eastward towards Osgiliath, over the Pelennor Fields surrounding the city, fertile townlands stretching from the walls of the city proper to the Rammas Echor.[7]

The city was built on the hill with seven concentric tiers cut on the hill culminating in the Citadel at the summit, 700 feet above the plain below. The outer wall was called the City Wall and was black, of the same material used in Orthanc. The City Wall was vulnerable only to earthquakes capable of rending the ground where it stood.[7]

Each level was walled and held a gate with each gate faced a different direction: only the great gate and that of the seventh level faced east; the gate to the second level faced southeast, and that to the third faced northeast; so altering between the two such that the path up through the levels wound to and fro rather than following a straight line. An outcropping of rock as high as the seventh level bisected all the lower levels except the lowest on the line of the Great Gate. The winding path through the city therefore passed through tunnels in this 'keel' five times.

The First Level included the Rath Celerdain, a white paved street with an inn, the Old Guesthouse.

The Sixth Level contained stables for riders, and the Houses of Healing. There was also Fen Hollen, a door which was almost always closed, leading to Rath Dínen[7], the 'shoulder' of rock that joined the Hill to the main mass of Mount Mindolluin rose to the level of the fifth wall and was fortified with large ramparts, where the tombs of the Kings of Gondor and their Stewards lay. The uppermost tunnel was delved into the spur of rock that jutted out of the eastern face of the Hill; The keystone of its archway was carved with the head of a crowned King. Guards of the Citadel manned the Seventh Gate which faced eastward in line with the Great Gate 700 feet below and emerged into the Citadel, the city's strongest point, surrounded by high walls and battlements on the 'keel'.

The Citadel housed the Court of the Fountain and the Tower of Ecthelion, which brought the total height of the city to 1000 feet.[note 1] Before the Tower grew the White Tree in a court. There were also the King's House, lodgings for the Steward, Merethrond, barracks for the Guard of the Citadel, and other buildings for guests and other workers.

In The Atlas of Middle-earth, Karen Wynn Fonstad estimates the diameter of the city to be 3,100 feet for the First Circle of the City.

According to the New Line book The Lord of the Rings: Weapons and Warfare, the height of Minas Tirith (in the films) from the foot of the gates to the top of the Tower of Ecthelion (which individually is said to be 300 feet tall) is around 1,000 feet (304.8 m), and the diameter of the city almost three-quarters of a mile (3,960 feet). The book also suggests that the towering bastion of stone, shaped like the keel of a ship, which rose from behind the Great Gates on the first level to the citadel on the seventh, was a quarter of a mile tall (1 320 feet). However this height does not take into account the Tower of Ecthelion, which was situated on the seventh level, meaning that in total the city is some 1,620 feet tall (493.7 m). This means that the city's total height is somewhere between 1,000 feet (304.8 m) and 1,620 feet (493.7 m).

Minas Tirith is one of the many battlefields in this game. The city is brown, unlike the books in which it is white.

The city appears briefly when Gandalf goes there to discern the identity of Bilbo's One Ring.

Minas Tirith can be seen in the distance for a few seconds when Faramir takes Frodo, Sam and Gollum to Osgiliath.

Tolkien's description of the physical layout of Minas Tirith is followed scrupulously in The Lord of the Rings: The Return of the King film, although certain artistic liberties are taken, such as the top of the rock being flattened and paved, along with being the location for the coronation of Aragorn, which in the book occurs instead on the Pelennor Field outside Minas Tirith, he then enters the city as King. In the film version it is within clear sight of the mountains surrounding Mordor and the fires of Mount Doom, so much that in at least one night scene the light of it shines on the faces of viewers from the city walls. However, in the books, the mountains were far enough away that from the city they looked like a low dark shadow over the land far away.

According to the "Making Of" featurettes on the Extended Edition DVDs, the appearance and structure of the city was based upon Mont Saint-Michel, France.

Portions of Minas Tirith were constructed as full-scale sets (built on the foundations of the disassembled Helm's Deep set), and the whole city as a highly detailed "bigature" by Weta Workshop combined with a detailed three-dimensional digital model, along with the whole of its surrounding environment. Despite the description of Minas Tirith's Othram as a black, indestructible wall, Jackson depicted all of the walls as white, which also are destructible.

In the films, the towers of Minas Tirith are equipped with 100 trebuchets. These played a significant role in the siege in the movie, as they were responsible for destroying many orcs, siege towers and catapults; some were smashed to bits by fell beasts, but all were repaired in the end.