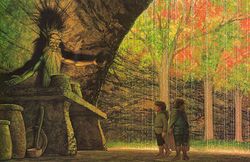 Wellinghall was one of the Ent-houses of Treebeard, formed by a narrow space in the flanks of Methedras, guarded and flanked by evergreen trees. The roofless 'hall' came to an end in a sheer rock wall, down which flowed a stream welling - hence the name 'Wellinghall' - from the springs of the River Entwash. The stream flowed down the rocky cliff, and fell across the arched entrance to an inner hall, where Treebeard kept his meagre furniture. From there, it flowed between the trees that lined the main space, and on to join again with the main flow of the Entwash.

Wellinghall is best known as the place where Merry and Pippin stayed with Treebeard on the night before Entmoot, on 29 February T.A. 3019.[1] It was here that they were first given Ent-draughts by Treebeard, and so grew to become the two tallest Hobbits recorded in the histories of the Shire.[2]

Treebeard's translation (into the Common Speech) for part of the name of his dwelling. It meant "hall (under or behind) the outflow of the spring of Entwash".[3] 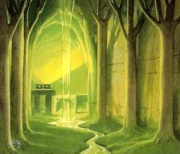 Wellinghall is the house to which Treebeard most often brings non-Entish visitors. A detailed layout and topography of Wellinghall is provided.[4]

At the site Wellinghall, evil players will face attacks by Awakened Plants.