In the year S.A. 3434 the host of the Last Alliance of Elves and Men fought the forces of Mordor in the Battle of Dagorlad.[2] During the battle on the plains more than half of the Elves of Lothlórien under the command of King Amdír were driven into the Dead Marshes.[3] After the battle many of the slain were buried outside of the marshy area but over time (in the Third Age) the Marshes had grown and swallowed the graves.[1] 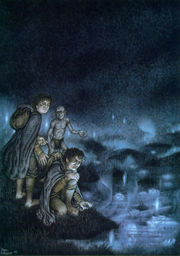 At the Council of Elrond Aragorn revealed that he had found and captured Gollum the year before along the skirts of the Dead Marshes.[6]

After Frodo and Sam had captured Gollum in the Emyn Muil (on 29 February 3019[7]), he revealed that he had found a hidden way across the Marshes.[8] The three took Gollum’s passage and on 1 March[7] started crossing the Marshes, where they saw candles and lights dancing about. Frodo was mesmerized by the lights and tried to reach out and touch the faces of the dead, at the bottom of the marshes. Gollum told them that the dead could not be touched, suggesting that he had once tried to eat them.[1] They completed the passage the next day and continued their way to the Morannon.[7]