"So they passed into the northern marches of that land that Men once called Ithilien, a fair Country of climbing woods and swift-falling streams."
― The Return of the King, "Of Herbs and Stewed Rabbit"

Ithilien (S, pron. [iˈθiljen]) was a region and fiefdom of Gondor.

Ithilien was a region of Gondor during most of the time in the history of Gondor. Its borders were probably the Nindalf in the north, the Ephel Dúath in the east, the river Poros in the south, and the river Anduin in the west.[1][2] The region was further divided into North and South Ithilien. The division was probably at the river Morgulduin or at the east-west-road from Osgiliath to Minas Morgul.[2] The Emyn Arnen were located in South Ithilien.[3]

Ithilien was a sheltered region. It was shielded from the east by the Ephel Dúath, protected from the north by the Emyn Muil, open to the southern airs and the moist winds from the sea.[4]

Small woods of resinous trees, fir, cedar, cypress, groves and thickets of tamarisk and terebinth, olive trees, bay,[4] great ilexes of huge girth, ash-trees and giant oaks[5] grew in Ithilien. There were also junipers, myrtles, thymes, sages of many kinds, marjorams, parsleys, and many herbs of forms and scents beyond the garden-lore of Sam. In addition, there were saxifrages, stonecrops, primeroles, anemones, filbert-brakes, asphodel, lilies, roses, irises, water-lilies, briars, eglantines and trailing clematises.[4] Furtermore, grass, celandine and acres populous with the leaves of woodland hyacinths[5] grew in Ithilien.

Historians in Gondor believed that, in the First Age, the Woses reached the region and were the first to cross the Anduin (probably near Cair Andros).[8]

Old records preserved in Gondor indicate that the name Arnen was once used for the larger part of the region during the Second Age.[1] When Elendil and his sons founded the Realms in Exile, Ithilien took its name after his son, Isildur. Of old, its chief city was Minas Ithil, the Tower of the Moon. It was briefly captured by Sauron in S.A. 3429,[9] but was restored later. The Tower of Cirith Ungol was built by Gondor as an eastern outpost of the defences of Ithilien after the Last Alliance.[10] Ithilien was a fair and prosperous land during the Second Age and the first part of the Third Age when Gondor was strong and Mordor deserted.

[edit] Invasions by Easterlings and Haradrim

In T.A. 490 during the reign of King Ostoher Easterlings invaded Gondor, probably through northern Ithilien. In T.A. 500 His son, Tarostar, defeated them and drove them out of Gondor.[11][12] The Tower of Cirith Ungol was also defending Ithilien from attacks from Sauron's remaining servants and stopped them from returning to Mordor, guarding the high pass over the Ephel Dúath. Gondor occupied the fortress until T.A. 1636 when the Great Plague killed large parts of the population. During the plague, most of the people of Osgiliath fled the city for the western dales or the woods of Ithilien.

After the disastrous Battle of the Plains in T.A. 1856 the Gondorian territories north of Ithilien and east of the river Anduin were abandoned by Gondor.[13][14]

In T.A. 1944, Wainriders from Rhûn made an alliance with the Haradrim, and a dual attack on Ithilien was launched. While the Wainriders assaulted Ithilien from the north, the armies of the Haradrim crossed the Poros and invaded South Ithilien. The Gondorian Captain Eärnil leading Gondor's inferior Southern Army, defeated the Haradrim, and then turned north, took the Wainriders by surprise and pushed many of them into the swamplands of the Dead Marshes.[17]

When Minas Ithil was captured by Mordor in T.A. 2002 after a three year long siege, it was renamed Minas Morgul, the Tower of Black Sorcery, a place of dread, and many of the people that still remained in Ithlien deserted it.[17]

During the Watchful Peace the lords of Morgul had secretly bred the Uruk-hai, and in T.A. 2475 these creatures assailed and overran Ithilien, captured Osgiliath. Boromir defeated the host of Morgul and regained Ithilien. However, from that time on no people dwelt in the ruined city of Osgiliath.[18]

Amon Dîn was used as a fortified outpost in Anorien keeping watch over the passage into North Ithilien from Dagorlad and any attempt by enemies to cross the Anduin near Cair Andros.[15][19]

In the days of Steward Túrin II Ithilien was infested by Mordor-orcs and more people fled west over the Anduin; only the hardiest people remained.[18]

In T.A. 2885, Ithilien was invaded in great strength by Haradrim that had occupied South Gondor. With the aid of King Folcwine of Rohan Túrin II won a victory at the Crossings of Poros, though the princes Fastred and Folcred were slain.[12] 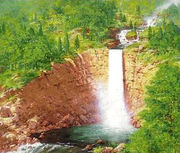 Most of the remaining people of Ithilien fled across the Anduin to escape further attacks by Uruks from Mordor (T.A. 2901)[12], but Túrin II still kept scouts there, operating out of secret refuges such as Henneth Annûn. Sauron returned to Mordor in T.A. 2951, and the last remaining people of Ithilien fled over the Anduin when Mount Doom erupted in T.A. 2954.[18][12] The Rammas Echor was constructed as part of the now necessary defenses of Gondor after Ithilien fell under the shadow of the Enemy, probably during the days of Steward Ecthelion II.[3][20] The descendants of the people who had dwelt in Ithilien, formed the corps of the Rangers of Ithilien.[4]

During the War of the Ring, in early March T.A. 3019, Faramir the son of the Steward Denethor, was leading the Rangers of Ithilien to ambush Haradrim who would pass through Ithilien.[4] After that Gollum led Frodo Baggins and Samwise Gamgee through Ithilien on their way to Cirith Ungol and into Mordor, and Faramir allowed them to continue when he was satisfied they were not agents of Sauron. 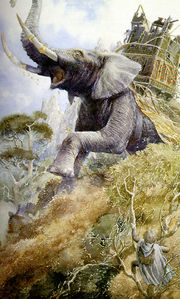 When the Host of the West marched on the Morannon, their scouts, men from Henneth Annûn led by Mablung discovered an ambush by Orcs and Easterlings that lay hidden in Ithilien at the same place where Faramir and his men had previously ambushed the men of Harad. The ambush was quickly turned when horsemen bypassed the Orcs and Easterlings and attacked them on their flank and from behind.[21] 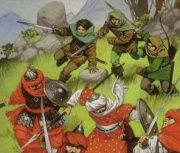 After the fall of Sauron Faramir retained the title of Steward. In addition, King Aragorn gave Ithilien to Faramir to be his princedom and ordered him to live in Emyn Arnen as the Prince of Ithilien. Minas Morgul was destroyed and not repopulated.[22] Faramir married Éowyn after the funeral of King Théoden in T.A. 3019.[23][24] The gardens devised by Legolas for the house of Faramir and Éowyn in Emyn Arnen were renowned.[25]

After the fall of Sauron Legolas brought south some of the Elves of Mirkwood and they dwelt in Ithilien, and it became once again the fairest country in all the Westlands.[26] After King Aragorn died, Legolas built a grey ship and sailed from Ithilien to the West, reportedly taking Gimli with him.[26][27]

Ithilien is a Sindarin name meaning "land of the moon"[28] reflecting the name of its ruler, Isildur, and its capital Minas Ithil.

It has been suggested that the name consists of the elements Ithil ("moon") + the affix end.[29]

The Sea-Lords of Gondor - Pelargir and Lebennin campaign module contains a detailed map that includes Ithilien.

The Southern Gondor: The Land module contains information about settlements and sites, the history, geography, flora and fauna, inhabitants, politics and power and warcraft of Harithilien. It is mentioned that the Emyn Arnen define the boundary dividing Harithilien (South Ithilien) from Forithilien (North Ithilien).

In the Ghosts of the Southern Anduin adventure module there are four adventures that take place in and around the town of Bar-en-Tinnen in Ithilien (renamed to Bar-en-Dinnen in Southern Gondor: The Land).

In the Gates of Mordor adventure module there are two adventures that take place in North Ithilien and one adventure that takes place in Durthang in the northern Ephel Dúath.

The Kin-strife campaign module contains detailed information about Minas Ithil (later renamed to Minas Morgul) during the time of the Kin-strife and three adventures that take place in Minas Ithil.