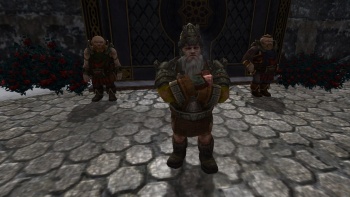 Gormr Doursmith and his guards.
The Dourhands were a clan of dwarves, invented for The Lord of the Rings Online: Shadows of Angmar. They were the dwarves that stayed behind to rebuild the Dwarven Halls in the Blue Mountains which were destroyed during the War of Wrath. They later aligned themselves with Angmar during the War of the Ring.

Some time during the Third Age, the Dourhands were experiencing great poverty and hunger. Under the leadership of Skorgrím they raided the Elven refuge of Edhelion for their relics and treasures. He also had the Dourhands ally themselves with the Goblins and Trolls to drive out the Elves. Yet, it was not enough and he was slain in battle. Leaderless, the remaining Dourhands scattered themselves throughout Eriador setting up strongholds and camps.

Six hundred years later, shortly before the War of the Ring, a Gaunt-lord from the First Age named Ivar who dwells in Garth Agarwen, an ancient fortress of Rhudaur, summoned a fell spirit to possess the preserved corpse of Skorgrím. The wight convinced the Dourhand that he was a dwarf from the line of Skorgrím and managed to ally them with the forces of Angmar.

Retrieved from "http://tolkiengateway.net/wiki/Dourhands"
Categories: Dwarves from adaptations | The Lord of the Rings Online characters