[edit] Awakening and the Third Age

[edit] During the War of the Ring 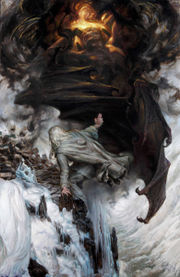 [edit] Beyond the Third Age