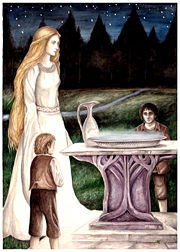 The Mirror of Galadriel by Peter Xavier Price

The Mirror of Galadriel was a basin filled with water in which one could see far away visions of the past, present and future. It was used by Galadriel, the Lady of Lórien, in Caras Galadhon.

On 15 February T.A. 3019, while the Fellowship of the Ring were staying in Lothlórien, she invited Frodo Baggins to look into it. Galadriel could not predict what the mirror would show and did not guarantee that its visions would come to pass.

Samwise Gamgee was also allowed a vision, which turned out to be a choice between returning to the Shire to prevent its destruction or to continue on the quest with his master to prevent Sauron from conquering all Middle-earth.[1]

The Phial of Galadriel contained water from the basin.

This recalls the ancient practice of water scrying or hydromancy: gazing into a shallow pool or bowl for purposes of divination. The Norns of Norse mythology used the Well of Urd as a scrying bowl.[source?]