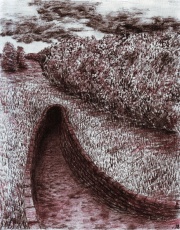 The High Hay (also called The Hedge) was a barrier hedge planted by the Hobbits of Buckland to protect their land from the Old Forest.

Constantly tended, it was thick and tall, and ran for over twenty miles. At the north end the Hay ran down to the river-bank close to the Brandywine Bridge. Nearby was an opening in the barrier, the North Gate, where gate-guards were posted day and night.[1] From there the Hay wound southwards to the confluence of the Brandywine River and the Withywindle. East of Crickhollow there was a private entrance that the Brandybucks used, which was a brick-lined tunnel under the Hay with a gate of thick-set iron bars on the forest side.[2] At the south end there was either another gate or the hedge ended before the meeting of the two rivers because the town of Breredon was on the Old Forest side of the barrier.[3]

The High Hay was planted sometime after the foundation of Buckland (T.A. 2340) but many generations before the War of the Ring.

When Frodo and his travelling hobbits journeyed from Bag End to Rivendell, Merry told that long ago the trees attacked the Hedge by planting themselves right by it and leaning over it. In response, the Bucklanders cut down hundreds of trees to make a great bonfire in Bonfire Glade and burned a long strip next to the Hay on its east side.[2]