Old Man Willow by J.R.R. Tolkien shows the Withywindle flowing in the background

The Withywindle was a minor tributary of the River Brandywine that flowed through the Old Forest on the borders of the Shire.[1] 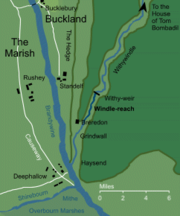 The river flowed into Brandywine at the south Buckland. At the mouth of the Withywindle, in the north bank, there was the Grindwall, a guarded hythe - or haven - that was beyond the protection of the High Hay, and had a fence extending into the water.[2]

Further, there was the small village of Breredon between the end of the High Hay and the Brandywine. The Elvet-isle in the Withywindle was home to swans.[2]

Long ago, Tom had found Goldberry, the River-daughter, in a pool down the Withywindle, and at the end of every summer he would go along the river to gather water-lilies for her. He was on his last trip of the year when he encountered the Hobbits.

When Frodo Baggins and his companions entered the Old Forest on 26 September 26 T.A. 3018, they found themselves drawn toward the Withywindle valley despite their intentions, and on the banks of the river they encountered Old Man Willow, an ancient tree whose hatred of all peoples who walked free on the earth permeated the woods. The Hobbits were lulled to sleep by Old Man Willow's spell. Frodo was pushed into the Withywindle and was held under by the willow's roots until Sam saved him, and Merry and Pippin were trapped inside Old Man Willow. They were rescued by Tom Bombadil.[3]

The word withy means "willow" (common element in English place-names) and windle means "spindle" or "reel" and is supposed to be translation from Hobbitish.[4]

Besides the meaning "willow-reel", the name is also a word-play of the word "Withywind", a type of bindweed, or convolvulus, a harmful weed that twines itself around other plants. The word withywind means "flexibly strong, entangle".[4]

David Salo has suggested it represents a speculative Old Hobbitish for *Withigwindel. He noted that the natural Old English interpretation of such a noun would have been "twisted willow (branches)" referring to "a basket made of willow-branches"[5] rather than the winding shape of the river.