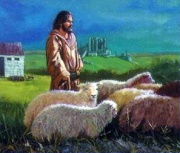 Artwork by Brad Williams for MECCG

Sheep were woolly grazing animals. The Folk of Marach migrated to Beleriand with flocks of sheep and goats.[1] They were especially common in the Númenórean region of Emerië,[2] and (in Middle-earth) on the Barrow-downs and in the Vales of Anduin.

In Gnomish, one of Tolkien's early conceptions of an Elven language, the word for "sheep" is moth (pl. mothrim or mothin); iol means "lamb" ("little lamb, lambkin" is iolinc).[6]

Sheep are found on the fields around Bagshot Row.

Sheep are found throughout the Shire and Bree-land.