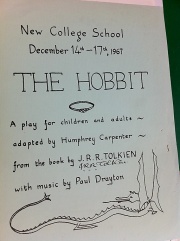 The programme from The Hobbit production

The Hobbit was a New College School (Oxford) musical adaptation of J.R.R. Tolkien's The Hobbit.[1] It was written by Humphrey Carpenter and Paul Drayton.

Through his family connections, Carpenter was able to visit Tolkien in order to seek his permission. Indeed it is this visit and encounter that Carpenter described in his biography of Tolkien.[2] Tolkien gave his permission and went to see the musical performed along with his wife Edith.[1]

Carpenter wrote: "I remember vividly when he came to see the show, held in the tiny school hall. He sat near the front, and since I was playing the double bass in the orchestra, I was able to watch his reactions. These were very simple: he had a broad smile on his face whenever the narration and dialogue stuck to his own words, which was replaced by a frown the moment there was the slightest departure from the book." [3]

It has been purported to be the first adaptation of The Hobbit;[1] this is not true, however, if one considers Gene Deitch's film adaptation from 1966.

Among the cast were George Halliday (as Bilbo Baggins), Martin Pickard (as Gandalf), Simon Halsey, Ashley Goodall and Stephen Lumsden. Alan Butterworth, the headmaster of the school, as Smaug the Dragon, speaking through a megaphone.

The audience included Howard Goodall (who watched his older brother Ashley Goodall), and Tolkien himself on the last night (17 December).