Uglúk was an Uruk in the service of Saruman during the War of the Ring. He captured Merry and Pippin and attempted to bring them to Isengard. 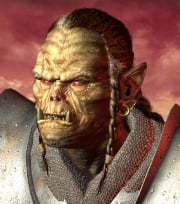 On 26 February T.A. 3019 Uglúk was the leader of the Orc-company that attacked the Fellowship of the Ring on the slopes of Amon Hen and carried off Merry and Pippin.[1]

Uglúk and his fellow Isengarders were servants of the Wizard Saruman, whom he called the Wise and respected him for his giving of man’s-flesh to eat. However, not all of his company were from Isengard – the group contained a contingent of Orcs from Mordor led by Grishnákh and a party of Northerners from Moria. Uglúk's orders had been to kill all of the Fellowship except the Halflings, who were to be brought back to Isengard and Saruman alive, captured and unspoiled, as quickly as possible. Grishnákh's orders were the same, except that his destination was to be Lugbúrz (Barad-dûr) and Sauron. The Northerners had no orders; they had come from the Mines for vengeance and killing, followed by a quick return to the north. Not long after the capture of the hobbits these conflicting aims led to a brief fight in which some of the Mordor-orcs and Moria-orcs were slain. Uglúk won and was able to impose his will; his Orc-company headed west while Grishnákh's group withdrew.[2]

On the evening of 26 February[1] Uglúk learned that a single horseman of Rohan had been spotted but had not been stopped. Realizing that pursuit by the Rohirrim would swiftly follow he applied medicine on Merry's wound and forced drinks down both hobbits' throats. He then cut their leg bonds so that they could run with the company. When the Northerners objected to his plan to keep on running by daylight Uglúk promised that they would run with him behind them, and he ran at the rear to keep an eye on all of his company.[2]

Despite the fast pace set by Uglúk on 28 February[1] an Éored of mounted Men began to overtake the Orcs. Near the Entwash most of the Northerners broke away and dashed off towards the Misty Mountains. At the same time Grishnákh returned with a couple of score of fellow Mordor-orcs. Due to the threat from the riders the two Orc-companies combined and headed for the forest. As they sped along they caught up with the Northerners who perforce rejoined Uglúk's command.

Despite all the speed they could muster the Orcs, now numbering two hundred, were surrounded just three furlongs from the eaves of the forest. The hemmed-in Orcs began to grumble against Uglúk until he assured them that reinforcements led by an Orc named Mauhúr were close at hand. As the night wore on the Riders made a sortie against the Orcs. Uglúk led his Isengarders to stem the attack, which gave Grishnákh the opportunity to attempt to steal away with the two hobbits.[2]

Grishnákh was killed and the hobbits escaped just as Mauhúr tried but failed to break the encirclement. Merry and Pippin fled into the woods as the Éored attacked at dawn on 29 February.[1] In the ensuing battle Uglúk almost broke through the Riders with a wedge of soldiers, but he was brought to bay at the very edge of the woods and slain by Éomer in a hand-to-hand sword fight.[2]

Uglúk died not knowing that the two hobbits he had captured did not have the One Ring. As Gandalf later noted, Uglúk's efforts would unwittingly lead to the downfall of Saruman.[3]

Uglúk, being a Uruk, was larger and stronger than the other Orcs and he was not bothered by sunlight. Uglúk bore the symbol of the White Hand of Saruman.

Uglúk was played by Brian Haines. Ugluk's scenes were severely abridged, but his death at the hands of the riders of Rohan can be heard.

Uglúk was portrayed by Nathaniel Lees.

Uglúk is a warrior-type "guardian" with four abilities: Charge of the Uruk-hai, White Hand's Whip, Fury of Isengard and Orcish Medicine.[4]

Retrieved from "http://tolkiengateway.net/wiki/Ugl%C3%BAk"
Categories: Articles needing citation | Characters in The Lord of the Rings | Uruk-hai | Servants of Saruman