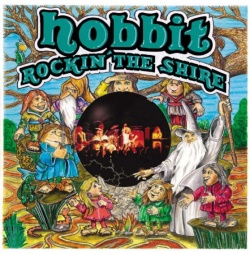 The cover of Rockin' the Shire by Hobbit.

Hobbit is one of the oldest Tolkien themed bands who sprouted back to the 70's. They paved the way for the Fantasy Rock genre and have become forged in the definition of Middle-earth Music.

Hobbit has also been featured in Amon Hen 194 as well as Ringers: Lord of the Fans.