Host of the Valar

(Redirected from Host of Valinor) 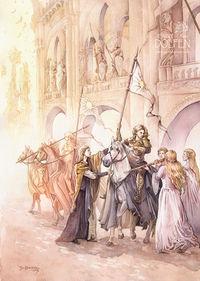 The Vanyar leave for war by Jenny Dolfen

The Host of the Valar or Host of the West was the mighty army that overthrew Morgoth and his legions at the end of the First Age.

The army itself was composed of Vanyar under Ingwion,[1] and the remaining Noldor of Valinor, under Finarfin. Manwë's herald Eönwë came with them, and possibly other Maiar and some Valar also joined the Host.[note 1]

They were brought to Middle-earth by the ships of Falmari, who took pity on the words of Elwing; however the Falmari refused to fight beside the Noldor, remembering the First Kinslaying. Once they landed, the Vanyarin host drove away the Orcs of the shores of the Belegaer in the Battle of Eglarest.[2]

The Host of the West met Morgoth's host of the North in the titanic clash of the War of Wrath. Assisted by the Great Eagles and Earendil, they were victorious.[3]