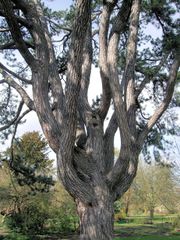 Laocoon was the name Tolkien gave to one of his favourite trees at the Botanic Garden of Oxford. Laocoon was a Black Pine, lat. Pinus nigra

On the last known photograph of Tolkien (taken 9 August 1973), he appears standing next to the tree.[1]

According to Dr Stephen Harris of Oxford University’s Department of Plant Sciences:

The received wisdom regarding the black pine is that it was planted in 1799 from seed that was collected by the Third Sherardian Professor of Botany, John Sibthorp, in Austria. We know that Sibthorp sent considerable amounts of plant material to Oxford from the eastern Mediterranean in 1786/87 and that he was in Austria in 1785. He was also in regions of Black Pine growth in 1795 but he died in 1796.
—[2]

If the story of the Black Pine is true then it should be at least 215 years old.

The tree suffered a collapse on the 26 July 2014 [3] and was cut down shortly after due to safety concerns.[4]

After its collapse Dr Harris said:

The pine having to be cut down means that we have the opportunity to date the tree precisely and determine whether Sibthorp is likely to have been involved. The particular subspecies of Black Pine represented by the tree has also been a point of controversy - we should now be able to settle this controversy as well.
—[5]

To celebrate its 400th anniversary, the Oxford Botanical Garden is partnering with The Oxford Artisan Distillery to produce Black Pine Whiskey. Some bottles will be available in boxes made from the tree's wood. [6] The bottle's stoppers will also contain a small piece of wood.

A sapling grown from the tree was planted in the Literary Garden at Oxford by the then Prince Charles in June 2021. [7] [8]