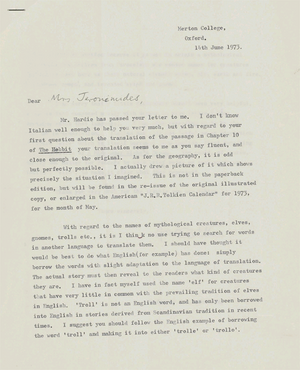 "I don't know Italian well enough to help you very much... As for the geography, it is odd but perfectly possible", advising her not to search for words in other languages to translate the mythological creatures in his work, "I have in fact myself used the name 'elf' for creatures that have very little in common with the prevailing tradition of elves in English. 'Troll' is not an English word ... I suggest you should follow the English example of borrowing the word 'troll' and making it into either 'trolle' or 'trollo'. 'Gnomo' should be avoided because it is not in origin a mythological word at all but derived from Parcelsus[sic?][note 1]..."