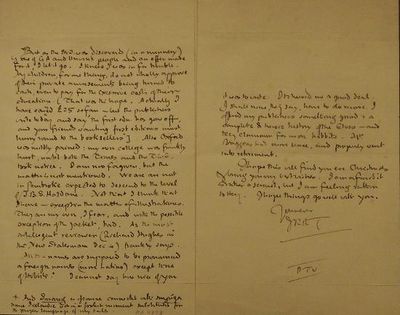 It was very nice of you to write to me; and although this was some time ago, I hope you will forgive the delay. I have been ill of late.

I don’t much approve of the Hobbit myself, preferring my own mythology (which is just touched on) with its consistent nomenclature - Elrond, Gondolin, and Esgaroth have escaped out of it - and organized history, to this rabble of Eddaic-named dwarves out of the Voluspa, newfangled hobbits and gollums (invented in an idle hour) and Anglo-Saxon runes. And elves have a more gracious and cunning alphabet. Which appears on the pot of gold in one of the coloured illustrations of the American edition - they have chosen that one.

However there it is: I did not offer it for sale. But as the MS. was discovered (in a nunnery) by one of G. A and Unwin’s people and an offer made for it, I let it go. I knew I was in for trouble. My children, for one thing, do not wholly approve of their private amusements being turned to cash, even to pay for the excessive costs of their education. [That was the hope. Actually I have ear[n]ed £25 so far - but the publishers write today and say “the first edn. has gone off, and your friends wanting first editions must hurry round to the booksellers”].

Also Oxford was mildly pained: my own college was frankly hurt, until both the Times and the T.L.S. took notice. I am now forgiven, but the matter is not mentioned. We are not in Pembroke expected to descend to the level of a J.B.S. Haldane. Not that I think that I have - except in the matter of illustrations. They are my own, I fear, and with the possible exception of the jacket, bad. As the most intelligent reviewer (Richard Hughes in The New Statesman Dec. 4) frankly says. All the names are supposed to be pronounced as foreign names (more Latino) except those of Hobbits.* [* And Smaug is of course connected with smjúga since Icelandic was in a foolish moment substituted for the proper language of my tales.]

I cannot say how nice of you it was to write. It ?cheered me a good deal. I shall now, they say, have to do more. I offered my publishers something grand, a complete and heroic history of the Elves - and they clamour for more Hobbits. Mr Baggins had some [time? fame?] and properly went into retirement.

I hope this will find you ere Christmas and bring you my best wishes. I am afraid it is rather a scrawl, but I am feeling rather tottery. I hope things go well with you.