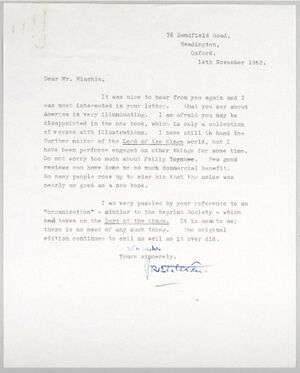 Few authors welcome devastating attacks from major critics, but here Tolkien expresses gratitude for Philip Toynbee's famous assault on his work in The Observer in 1961: "Do not worry too much about Philip Toynbee," he tells Minchin. "Few good reviews can have done me so much commercial benefit. So many people rose up to slay him that the noise was nearly as good as a new book." Toynbee attacked the Hobbit and Lord of the Rings as "dull, ill-written, whimsical and childish." He marveled that leading literary figures were fascinated by Tolkien's books, but felt relieved that "today those books have passed into a merciful oblivion." Outraged fans rose up in protest against this judgment, and indeed, Tolkien goes on to thank Minchin for his "very illuminating" comments about America--where Lord of the Rings was about to be published in paperback and attract millions more new readers and fans over the following years.

He also mentions his latest book--The Adventures of Tom Bombadil (1962) "which is only a collection of verses with illustrations. I have still in hand the further matter of the Lord of the Rings world, but I have been perforce engaged on other things for some time." In closing, he expresses puzzlement that an organization similar to the Reprint Society has taken up Lord of the Rings. "There is no need of any such thing," he boasts. "The original edition continues to sell as well as it ever did." Minchin was editor of The Legion Book (1929) and, like Tolkien, a veteran of the Great War. A fine Tolkien letter discussing the enduring appeal of his Middle Earth tales.[2]