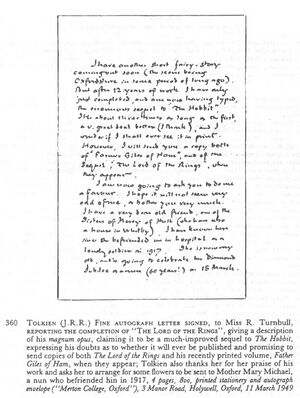 [Description:] Autograph letter signed, to Miss R. Turnbull, reporting the completion of "The Lord of the Rings", giving a description of his magnum opus, claiming it to be a much-improved sequel to The Hobbit, expressing doubts as to whether it will ever be published and promising to send copies of both The Lord of the Rings and his recently printed volume, Father Giles of Ham [sic], when they appear; Tolkien also thanks her for her praise of his work and asks her to arrange for some flowers to be sent to Mother May Michael, a nun who befriended hin [sic] in 1917.

I have another short fairy-story coming out soon (the score being Oxfordshire in some period of long ago). But after 12 years of work I have only just completed, and am now having typed the enormous sequel to "The Hobbit". It's about three times as long as the first, a v. great deal better (I think), and I wonder if I shall ever see it in print.

However, I will send you a copy both of "Farmer Giles of Ham", and of the Sequel "The Lord of the Rings", when they appear.

I am now going to ask you to do me a favour. I hope it will not seem very odd of me, or bother you very much. I have a very dear old friend, one of the Sisters of Mercy of Hull (who have also a house in Whitby). I have known her since she befriended me in hospital as a lonely soldier in 1917. She is now very old, and is going to celebrate the Diamond Jubilee as a nun (60 years!) on 15 March.