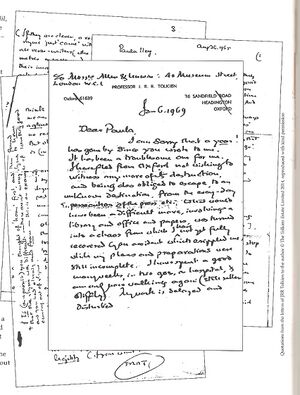 "Paula did tell me she’s always jealously guarded the letters (and mentioned in the article not letting the biographers see them) so I believe this is the first time the contents will have been published anywhere, at least some of them."

A sequence of letters to a young family friend, including a long discussion of the principles of verse composition. The letter of 26.8.65 refers to the imminent publication of The Hobbit and The Lord of the Ringsin America in response to a pirated edition. In a five-page separate appendix ('You need not read it!') commenting on some poems sent to him, Tolkien compares his own childhood attempts at poetry - 'I remember when I was about seven trying to write some verse about a dragon, and I said it was a 'green great dragon' ...' and emphasises the importance of the technical aspects of verse ('Verse is I think in many ways like games'), with some particular suggestions ('But it is great cheek to interfere with other poets'). The later letters comment on Tolkien's departure from Oxford, 'not wishing to witness any more of its destruction' and escaping from the 'persecution of the press'; and, in general terms, on poetry. [2]