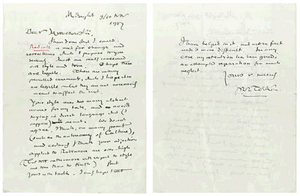 Between midnight on 9 November and 10 November 1957, J.R.R. Tolkien wrote a letter to Przemyslaw Mroczkowski.[1][2]

In his letter, Tolkien offers some succinct advice on the writing of English: "Your style uses too many abstract nouns for my taste, and avoids saying in direct language what (I suppose) is meant". It also summarises the nature of their collaboration, with Tolkien showing a rather more sceptical approach to Robinson's edition (which has enjoyed a long life as the standard undergraduate text) than does Mroczkowski: "I have done what I could. Red ink is used for changes and corrections which I propose to you seriously. Most are really concerned with style and tone, I hope these are legible – but they are not necessarily meant to affect the text... We do not agree, I think, on many points... and certainly I think your adjectives applied to Robinson are over-high (but that rather more with respect to style and tone than to truth). But yours is the task. I only hope that I have helped in it, and not in fact made it more difficult. In any case my intention has been good, an attempted reparation for much neglect".
During the course of his running critical commentary on Mroczkowski's critical commentary, Tolkien shows an acute awareness of the dangers facing an author should he die before completion of his major work (although The Lord of the Rings had been successfully published, the great bulk of his own work on the history of Middle Earth was still to be completed, and was to remain so at his death): "As to the order of the fragments of the C. Tales, debate is likely to continue as long as anyone is deluded by the hope of reaching any certainty by argument in such a matter. The great scheme was never completed. Chaucer himself never erected even a definite scaffolding, nor reached any fixed decision as to the placing of those parts of the work which he had finished. If to this basic uncertainty we add the possibility that the papers in his possession were disordered at his death (more likely than not), and shuffled uncritically after it, while copies may have been extant beyond his control, it will seem that discussion of the 'correct' order of the particular branches of finished work may be vain". As for Robinson's edition itself, he laments "the sad fate of Chaucer in becoming a subject of examination for adolescents", although he concedes that, in lieu of a proper variorum edition, Robinson's "will, no doubt, again serve and serve well the needs of the average reader of the poet, without troubling him too much with technical matters (least of all linguistics), and without really full and illuminating commentaries".
—[4]