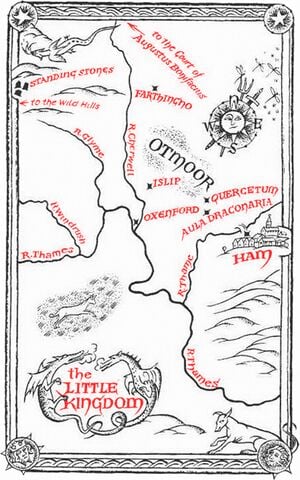 Map of the Little Kingdom by Pauline Baynes

The Little Kingdom was a minor realm within the confines of what is now England that existed during a dark period of its history. The Little Kingdom may have existed "after the days of King Coel, but before Arthur or the Seven Kingdoms of the English". It was the realm of the legendary King Ægidius Draconarius, who started out in life as Farmer Giles of Ham. The realm was separated from Augustus Bonifacius's earlier Middle Kingdom.

According to the translator of the story, Farmer Giles of Ham, the boundaries of the Little Kingdom are difficult to determine from the scanty evidence. The events of the legend seem to have taken place in the valley of the Thames, with an excursion north-west to the walls of Wales. The kingdom apparently never reached far up the Thames into the West, nor beyond Otmoor to the North, and its eastern borders are dubious. Its capital was evidently in its south-east corner, though its confines are unknown.[1]

A fragmentary legend indicates that Georgius, son of Giles and his page Suovetaurilius (Suet) had an outpost against the Middle Kingdom that was maintained at Farthingho.