"In truth little fear was seen in her face or her bearing. Tall and strong she seemed; for great stature were those of Hador's House..."
― The Children of Húrin, "The Journey of Morwen and Niënor to Nargothrond"

Nienor, also called Níniel, was the second daughter of Húrin and Morwen and the sister of Túrin. Her father was a great foe of Morgoth and was cursed by the Dark Lord. That curse would also extend to his family, leading to some of the greatest tragedies of the First Age.

Nienor was born in Dor-lómin, a region in Hithlum, during the year that the Nirnaeth Arnoediad ("The Battle of Unnumbered Tears") was fought. In the aftermath of the battle, her father Húrin, was captured and the treacherous Easterlings had settled into the land of Dor-lómin, oppressing the People of Hador. Fearing for her son's life, Morwen sent Túrin to the kingdom of Doriath for safety. As a result, Nienor never knew what her brother looked like.[3]

When Túrin had reached Doriath safely, Thingol had messengers sent to Dor-lómin to have Morwen and Nienor brought to Doriath. While Nienor remained with her mother in Dor-lómin due to Morwen's pride,[3] messengers brought tidings to Túrin of Morwen and Nienor and as Túrin grew to be taller than many Elves, Nienor grew to be "a flower in the grey North". For nine years this continued, until travel to and from Hithlum became more dangerous and Thingol stopped sending messengers, causing Túrin to fear that Morwen and Nienor had met some ill-fate.[4]

Many years later, due to the actions of the mysterious Mormegil at Nargothrond, Morgoth's grip over Hithlum was loosened, allowing Morwen and Nienor to flee at last to seek for Túrin in Doriath. Despite finding Túrin gone with no evidence of where he went, Morwen and Nienor were treated in Doriath with honor as the guests of Melian and Thingol.[5]

After the Fall of Nargothrond, many survivors fled to Doriath, bringing many rumors which Nienor and her mother heard. Of which, they all claimed that the Mormegil was actually Túrin. Morwen intended to leave Nienor in Doriath while she journeyed out to seek the truth of Túrin's survival. Nienor wished to stop her mother, but Morwen had left before she could even try. A company of Elves led by Mablung set off on Thingol's orders to keep Morwen safe. Yet none of them expected that Nienor would sneak into their company. Nienor had initially hoped that she could convince Morwen to turn back, but Morwen refused, and tried to command her to go back to Doriath, but Nienor rebuked her saying that she had a will of her own. In the end, Morwen relented and Mablung brought them to Amon Ethir while he sought for tidings.[1]

Unfortunately, the Dragon Glaurung had just sacked the Elven city, and, sensing their approach, caused a cloud of foul vapor to rise from the river Narog. The guards and horses of Nienor and Morwen panicked fled, and Nienor was thrown from her horse, at which point she decided to not give into despair and climbed the Amon Ethir to gain a better perspective of the situation. Upon reaching the hilltop, Nienor found herself faced eyes of the golden head of Glaurung, who had just so happened to have been climbing the other side. Upon the sight of Nienor, Glaurung forced her into revealing that she was the daughter of Húrin. After which, he used his enchantments to draw a great darkness filled with emptiness upon Nienor, thrusting her suddenly into a state of total amnesia.[1] 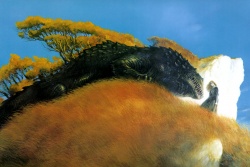 Nienor and Glaurung by John Howe

Eventually, Mablung had returned to Amon Ethir, and intended to take her back to Doriath, but despaired upon the next morning when Nienor stumbled and collapsed. Yet he regained his hope when three of the dispersed guards returned. Though their journey was slow, Nienor slowly regained some of her strength, yet her mind was still blank.[1]

Eventually after many days, they neared the western border of Doriath, intending to cross the Taeglin by a guarded bridge near Esgalduin. Yet, when the Elves decided to rest there, they were caught unaware "by a band of Orc-hunters" that roamed the region. Upon waking in the confusion and terror, Nienor let out a cry if alarm and sped into the forest, with the orcs in pursuit. While the Elves quickly slew the orcs, Nienor was lost to them. Mablung and his company hunted far, between the Ered Wethrin and the Mouths of Sirion, yet their search was in vain,[1] and Nienor fled deep into the Forest of Brethil, tearing off her garments one by one, and running naked through the forest until she fainted into "a deep brake of fern" when evening came.[6]

Here, a group of Haladin led by a man named Turambar found her, naked and terrified, at the grave of Finduilas, the elf-maid who had loved him. Because Nienor did not remember her identity, he named her Níniel ("Tear-Maiden") and brought her to safety in the Forest of Brethil.

The men of Brethil returned to the settlement of Ephel Brandir soon after. When Níniel fell sick, Brandir tended to her, secretly falling in love. However, Níniel loved Turambar more, and after three years, they were wed. By the next spring, she was halfway through her first pregnancy.

It was then that rumors of Glaurung's approach reached Turambar, who went out to slay him. The dragon cast a spell on Turambar even as he dealt the worm a mortal blow, and Turambar fell into a swoon. At this moment, Níniel, who feared for her husband's life, arrived and found him apparently dead. The dying Glaurung then removed Níniel's amnesia with his last words, forcing her to confront the revelation that, Turambar, the man who she had married, was her own brother Túrin, and that she was carrying his unborn child. Nienor threw herself into the gorge of Cabed-en-Aras. When Túrin finally awoke, he was told of Nienor's fate by Brandir, but he refused to believe it, and slew him in anger. Then Mablung of Doriath arrived and corroborated Brandir's tale. In utter misery, Túrin killed himself on his sword Gurthang.

Nienor's body was never found, but her name was written on the Stone of the Hapless beside her brother's. Years later, the poet Dírhaval composed the Narn i Chîn Húrin about the tragedy of the children of Húrin.[7]

Nienor is a Quenya name meaning "Mourning",[3] although the only clear element is nie ("tear"). In The Children of Húrin, Christopher Tolkien chose to write Nienor's name as Niënor.[8]