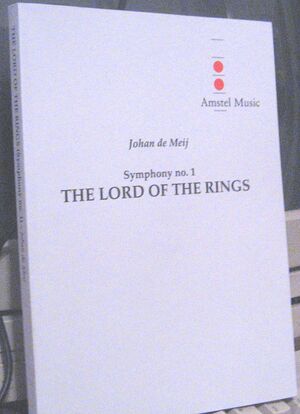 "The Lord of the Rings", by Johan de Meij

Symphony No. 1 "The Lord of the Rings" is the first symphony for concert band written by Johan de Meij. It premiered in 1988 with the Groot Harmonieorkest van de Belgische Gidsen conducted by Norbert Nozy. The CD by the military band Koninklijke Militaire Kapel made the symphony famous. The symphony is based on themes from the novel by J.R.R. Tolkien; it consists of five separate movements, each illustrating a personage or an important episode from the book. In 1989 the symphony was awarded the Sudler Composition Award[1]. An orchestral version also exists, which orchestrated by Henk de Vlieger and premiered in 2001.

The symphony itself consists of five movements:[2]