Twelve houses of the Gondothlim[edit]

The Gospels contain a fairy-story, or a story of a larger kind which embraces all the essence of fairy-stories. They contain many marvels—peculiarly artistic, beautiful, and moving: 'mythical' in their perfect, self-contained significance; and among the marvels is the greatest and most complete conceivable eucatastrophe. The Birth of Christ is the eucatastrophe of Man's history. The Resurrection is the eucatastrophe of the story of the Incarnation. This story begins and ends in joy. It has preeminently the 'inner consistency of reality.' There is no tale ever told that men would rather find was true, and none which so many skeptical men have accepted as true on its own merits. For the Art of it has the supremely convincing tone of Primary Art, that is, of Creation. To reject it leads either to sadness or to wrath.
—On Fairy-Stories

Some have puzzled over the relation between Tolkien's stories and his Christianity, and have found it difficult to understand how a devout Roman Catholic could write with such conviction about a world where God is not worshipped. But there is no mystery. The Silmarillion is the work of a profoundly religious man. It does not contradict Christianity but complements it. There is in the legends no worship of God, yet God is indeed there, more explicitly in The Silmarillion than in the work that grew out of it, The Lord of the Rings. Tolkien's universe is ruled over by God, 'The One'. Beneath Him in the hierarchy are 'The Valar', the guardians of the world, who are not gods but angelic powers, themselves holy and subject to God; and at one terrible moment in the story they surrender their power into His hands.[1]:91

Tolkien explained he pretended to make a 'new' mythology, but like all mythologies it had to include many elements from other places. Thus, the stories of the Legendarium were founded with Christian elements since its beginning. The early Music of the Ainur

I am a Christian, and indeed a Roman Catholic, so that I do not expect "history" to be anything but a "long defeat" - though it contains [...] some samples or glimpses of final victory.
—Letter 195, p. 255

Tolkien gave Kilby a lecture which describes the biblical figures in TLOTR (Frodo the self-sacrificed priest, the prophet Gandalf or the "Much of this is true enough -except, of course, the general impression given (almost irresistibly in articles having this analytical approach, whether Christians or not) that I had any 'scheme' in my conscious mind before or during the writing." p. 56 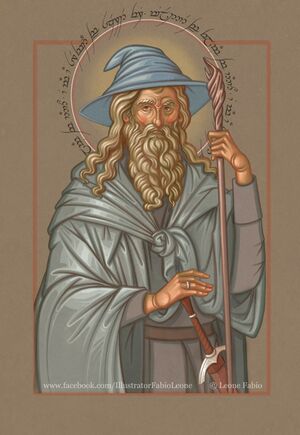 Gandalf, servant of the Secret Fire by Fabio Leone