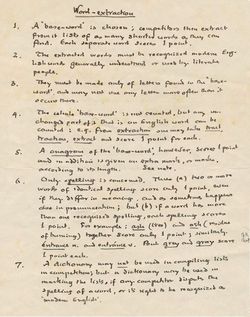 Word-extraction is a word-game created by J.R.R. Tolkien and described in a manuscript written c. 1968.

As a good philologist, Tolkien enjoyed word-games, and he played many times with his family while he stayed in Bournemouth.[1] One of the games he invented there was written on the reverse of a cyclostyled list of out-of-print books dated 3 May 1968, which Tolkien gave at some point to Dr. Denis Tolhurst (Tolkien's doctor at Bournemouth) and his wife. The manuscript was sold at Bonhams in 2019,[2] and is currently on sale at Lucius Books.[3]

1. A 'base-word' is chosen; competitors then extract from it lists of as many shorter words as they can find. Each separate word scores 1 point.


2. The extracted words must be recognized modern English generally understood or used by literate people.


3. They must be made only of letters found in the 'base-word' and may not use any letter more often than it occurs there.


4. The whole 'base-word' is not counted, but any unchanged part of it that is an English word can be counted: e.g. from extraction one may take tract, traction, extract and score 1 point for each.


5. A anagram of the 'base-word', however, scores 1 point and in addition is given and extra mark, or marks, according to its length. See note.


6. Only spelling is concerned. Thus (a) two or more words of identical spelling score 1 point, even if they differ in meaning, and as sometimes happens also in pronunciation; but (b) if a word has more than one recognized spelling, each spelling scores 1 point. For example: ash (tree) and ash (residue of burning) together score only 1 point; similarly éntrance n. and entránce v. But grey and gray score 1 point each.


7. A dictionary may not be used in compiling lists in competition; but a dictionary may be used in marking the lists, if any competitor disputs the spelling of a word, or its right to be recognized as 'modern English'.