Lake-town, also known as Esgaroth upon the Long Lake, was the township of the Lake-men in Wilderland.

The town was constructed entirely of wood and stood upon wooden pillars sunk into the bed of the Long Lake, as a protection against the dragon Smaug, who dwelt nearby in the Lonely Mountain.

It was situated on the west side of the lake, north of the mouth of the Forest River in a calm bay that was formed by the shelter of a rock promontory. A long wooden bridge connected the town to the land, ending in a building, with guards watching over the entrance.

The central market square of the Lake-town. Art by Henning Janssen

It is not known when Lake-town was built. The name Esgaroth is mentioned on Thrór's Map, and is said to be an older name, known while Smaug was younger[5]. When Bilbo Baggins came to the town, he noticed old pilings of a (possibly older) greater town along the shores when the waters sank in a drought.[2] It's possible that an original Esgaroth was destroyed sometime in the past, and the later Lake-town was its remnant.[4]

The Lake-town was occupied by the Lake-men, descendants of the survivors of the former Kingdom of Dale, like Bard the Bowman, whose ancestor was its last lord, Girion. However as the years passed, Smaug was forgotten and children even doubted about his existence or the tales of older men who sometimes had seen him flying.[2]

In the autumn of T.A. 2941, Thorin and Company escaped from Thranduil's halls and Thorin followed by Fíli, Kíli and Bilbo decided to enter the town and speak to the Master. The Dwarves were welcomed warmly because the Lake-men were eager to have the King under the Mountain return. The Dwarves and Bilbo were hosted, rested and pampered before being sent with boats to the ruins of Dale to confront the dragon. 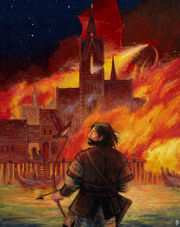 The Black Arrow by Lída Holubová

Some days later, however, the town was attacked by Smaug, but Bard the Bowman, who had indirectly learned of a weakness in Smaug's armour, slew the dragon with the Black Arrow. The town was wrecked by the dragon who fell dead on it and sunk in the lake. Survivors managed to sail to the lakeshore with boats and camped there[1].

Thorin refused to share Smaug's treasure and declared war on both the Lake-men and the Elves. The conflict eventually exploded because they heard news of approaching Wargs and Goblins. Thus began the Battle of Five Armies.

The town was afterwards rebuilt to the north of its former location, using some of the treasure. The town's Master ran off with some of the gold. Part of the town's population followed Bard to resettle the Kingdom of Dale.

By the time of the War of the Ring, Lake-town was part of the kingdom of Dale under Bard II.[6]

The name Esgaroth was seemingly not given a clear etymology in any of Tolkien's later writings. A manuscript written after The Lord of the Rings states that Esgaroth was "not Sindarin (though perhaps Sindarized in shape)", similarly to the name Galion.[7]

In earlier manuscripts, at least two interpretations of the name Esgaroth appeared:

Lake-town is portrayed much larger than in Tolkien's illustrations, not built on a single square ramp, and having many 'blocks' and canals. It is run by a heavily corrupt Master, aided by Alfrid. While the other Dwarves set out for Erebor, Kíli, Fíli, Dori and Óin stay behind with Bard's children Bain, Sigrid and Tilda to tend to Kíli's arrow wound. Orc raiders assail the town, but they are repelled by the Dwarves, Legolas and Tauriel. Tauriel heals Kíli with athelas.

The town is destroyed by Smaug, who attacks it as revenge for helping Bilbo and the Dwarves. The remaining Dwarves escape on a barge with Tauriel's help. Bard (with Bain's help) kills Smaug with a windlass. His falling corpse kills the Master and all on his barge.

The rebuilt Lake-town is a major travel point for adventurers in the North, situated further up the Lake from the old Lake-town. The watery ruins of Esgaroth-of-old (the former Lake-town) are still intact on the Long Lake, with the Bones of Smaug resting on the remains. A band of brigands pilfer the location for valuables as well as Smaug's Bones.