The origin and making of lembas is only known by the short text Of Lembas written by Pengolodh. Lembas was made first by Yavanna from special corn that grew in Aman, and Oromë gave it to the Elves of the Great Journey. For this reason, it was an Elven custom that only women should make lembas; they were called Yavannildi who knew the secret of its recipe. Also, the custom requested that only an Elven Queen should keep and distribute the lembas, for this reason she was called also massánië or besain.[1] 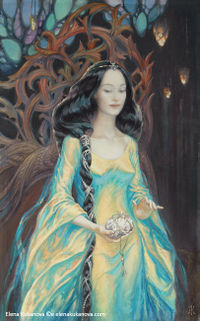 The Light of Valinor by Elena Kukanova

The Galadhrim had a large store of lembas in Lothlórien. Galadriel gave some of it to the Fellowship of the Ring upon their departure.[3] Frodo Baggins and Samwise Gamgee subsisted on it through the majority of their journey from there into Mordor.

The tradition of farming the Western Corn and the making of Waybread was lost for ever in Middle-earth after the departure of Galadriel and the death of Arwen.[4]

According to Gimli, it was similar to Cram, although one of the Elves of Lothlórien commented that it was more pleasant, and more strengthening than any food by Men.[3]

Like other products of the Elves, it was offensive to evil creatures; Gollum refused outright to eat of it.[5] When Frodo was captured by Orcs in Mordor, the Orcs hated the look of the lembas even more than Gollum.[6]

Lembas is Sindarin and derived from Old Sindarin lenn-mbass which means "journey-bread". As a rough translation of this term it was also often called "Waybread".[1] This word came in turn from Primitive Elvish le(n)dembassē, literally meaning "bread taken on leaving home (for a long journey)", which in Quenya was lerembas.[7] However, the proper Quenya term for lembas was coimas which means "life-bread".[1]

The lembas has been compared with the Eucharist, even as being the most explicit symbol of Christianity in The Lord of the Rings.[8] Tolkien himself mentions that the lembas are one of the few details from which can be deduced he is a Catholic writer.[9] He acknowledged the religious significance of the lembas in his answer to Forrest J. Ackerman, who had called lembas as a 'food concentrate' in a possible adaptation of The Lord of the Rings.[10] Like "lembas," "viaticum," a term for the Eucharist, means "provision for a journey."

The name "Waybread" resembles in a way the Old English name for the herb plantain, which was wegbrade.[11]

The redundant term "lembas bread" is occasionally used as the gift of lembas at Lothlórien is not included in the theatrical release of The Fellowship of the Ring. The term "lembas bread" was probably chosen in order to immediately identify the substance to filmgoers at the beginning of The Two Towers.

Lembas, Elvish waybread. One small bite is enough to fill the stomach of a grown man.
—Legolas, The Lord of the Rings: The Fellowship of the Ring, "Farewell to Lórien (scene)"