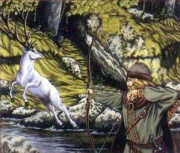 Tales of the Hunt by Pascal Yung

"Suddenly on the path ahead appeared some white deer, a hind and fawns as snowy white as the hart had been dark."
― Flies and Spiders, The Hobbit

White deer were a type of deer found in the forest of Mirkwood. Along with two fawns, such a hind surprised Bilbo and the Dwarves on the Quest of Erebor when they first entered Mirkwood forest.[1]

An encounter with a white doe occurs in "The Lay of Aotrou and Itroun", preceding Autrou's meeting with a witch.

Magical animals of white colour were common in Celtic and Welsh mythology. The legends of King Arthur include a story about the pursuit of a large, white deer, leading to the arrival at the magical Sir Pellinore's well.[2]

Douglas A. Anderson has noted that the appearance of white deer in The Hobbit forebodes the approach by Bilbo and company to the Wood-elven area of Mirkwood, as "[i]n Celtic tradition, encounters with white animals (especially white deer) usually prefigure an encounter with beings from the Otherworld (Faërie)".[3]

The White Hart is the largest breed of deer found in northwestern Middle-earth (rumoured to have Faerie blood). The suggested Sindarin name of this type of deer was Nimfiara in the early publications from MERP, later revised to Nimmerais (sing. Nimmaras).[4][5]

The Extended Edition includes a scene in which a white deer appears as the dwarves try to cross the river in Mirkwood. Thorin tries to shoot it down with an arrow but he misses. The deer later flees.