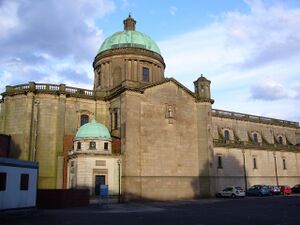 Birmingham Oratory as in 2009

The Birmingham Oratory is a Roman Catholic church in Birmingham, England. It is used primarily by the Oratory of Saint Philip Neri, a congregation of priests and lay-brothers. Because of its baroque design, it is often called the "Little Rome in Birmingham".

The church was constructed between 1907 and 1910 as a memorial to John Henry Newman, a prominent English cardinal who converted from Anglicanism to Catholicism, now a canonized saint.

J.R.R. Tolkien, a devout Catholic, worshipped here for about seven years. Francis Xavier Morgan, Ronald and Hilary Tolkien's guardian, was a priest of the oratory.