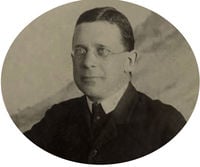 Father Francis Xavier Morgan (January 18, 1857 - June 11, 1935) was a Roman Catholic priest at the Birmingham Oratory in Birmingham. He was half Welsh and half Anglo-Spanish.

He took care of Mabel Tolkien during her illness, and took over custody of Ronald and Hilary Tolkien after her death. Father Francis was a pipe-smoker and Tolkien derived his own custom from this.

Father Francis Xavier Morgan, forbade Tolkien to see Edith Bratt until he was twenty-one because he saw her as a distraction from his studies. With one exception, Tolkien obeyed this instruction to the letter while Father Morgan's guardianship lasted.

Tolkien named his first son, John Francis Reuel after him.[1]

In the Gnomish Lexicon, Tolkien translates the name "Francis" into Gnomish: Faidron or Faithron. These names are clearly related with other words of the same lexicon: fair ("free, unconstrained"), faidwen/faith ("liberty"), faithir ("liberator, Saviour").[4] The translation is based on etymology as the name Francis (from Italian Francesco) derives from the Franks, who in turn gave the word frank ("free of servitude; candid, outspoken, unreserved").[5] Ferrández Bru considered that Tolkien honored Father Francis this way.

Ferrández Bru suggests that Thingol was partly inspired from Father Francis, considering his opposition to the courtship of Beren to Luthien; with whom Tolkien identified himself and Edith.[source?]