Critique of "Distressing Tale of Thangobrind the Jeweler" 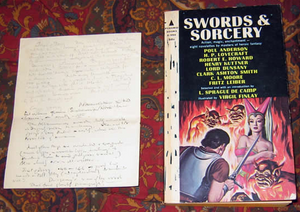 Critique of "Distressing Tale of Thangobrind the Jeweler" refers to a hand-written manuscript by J.R.R. Tolkien, in which he offers a criticism of Lord Dunsany's story "Distressing Tale of Thangobrind the Jeweler". The manuscript was found in Tolkien's copy of the fantasy anthology Swords & Sorcery (which included the story), a gift from L. Sprague de Camp (who wrote the introduction of the book). According to sales of the item, Tolkien's text is "not [a] very complementary critique".[1][2]

Jirel of Joiry. Does create an atmosphere
and [?the] sinister 'corrupt' household of Alaric was
eerie and credible. But I never [sic] find phantasmal
struggles such as that of Jirel with 'Undead' Andred
quite unconvincing — especially when the victims escape!

Dunsany at his worst. Trying so hard for
the shudder. But not for a moment making the
tale 'credible' enough to {pro} make a background for
a strong [?e...]. And the ending lamentable — in
fact [?insulting]. In a world in which a Thangobrind
could even begin to be (let alone Hlo-hlo or [?all the rest])
early 19th century Riviera [?...] is surely utterly
impossible — or vice versa. And what is meant
by selling his daughter's soul.