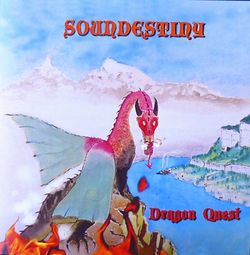 Dragon Quest is an album by Soundestiny that was released in 2012.

All words and music were written by Darryl Grant Potter. This CD is a 12-song album that contains music inspired by The Hobbit. The songs themselves contain no references to any Middle-earth characters such as Frodo or Gandalf, nor place-names like Mordor or Gondor. Previously (2009),Soundestiny released 4 of these tracks on an EP All that Glitters. This 2012 album contains a further 8 songs that complete their homage to The Hobbit. The 3-year gap between these releases occurred because the band released their 2nd LOTR-inspired album Winds of Change in 2010.

(Deep within the green music video)