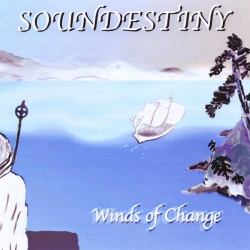 Winds of Change is an album by Soundestiny that was released in 2010.

All words and music were written by Darryl Grant Potter. This CD is Part II of two albums that constitute the rock musical RingLord – a rock opera or rock musical inspired by The Lord of the Rings. The songs themselves contain no references to any Middle-earth characters such as Galadriel or Boromir, nor place-names like Rohan or Gondor. As the project consisted of 25 songs in total, the band decided to divide the tracks into two separate TLOTR-inspired album releases. Winds of Change (RingLord Part II) was released in 2010 whereas Shadow Rising (RingLord Part I) had been released six years prior by Soundestiny in 2004. The time lag was the result of live concerts, music video filming and recording of two other CDs during the intervening period.