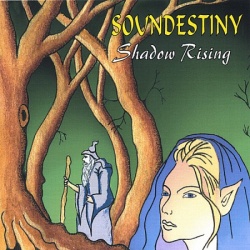 Shadow Rising is an album by Soundestiny that was released in 2004.

It was inspired by The Lord of the Rings and was the band's first album. The music was written by Darryl Grant Potter and Michael Bohl; lyrics were by Darryl Grant Potter. After two more albums – Journey Through Love in 2006, and All that Glitters in 2009, Soundestiny released the follow-up LOTR-inspired album – Winds of Change in 2010. The band then returned to the studio to record another folk rock album of music entitled Dragon Quest, inspired by The Hobbit. The albums Shadow Rising and Winds of Change together form a 25 song rock opera or rock musical titled RingLord. This rock musical was inspired by The Lord of the Rings only. Throughout the song lyrics, there are no mentions of any of the characters from The Lord of the Rings, such as Gandalf or Aragorn, nor of Middle-earth place names like Rivendell or Lothlorien.

(The final, hidden track, Ever on, starts one and a half minutes after the end of the twelfth track. This unplugged song also appears as track number 12 on Soundestiny's Dragon Quest album released in 2012 - but with percussion and harmony added.