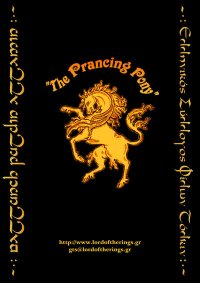 Banner and logo of the GTS; the tengwar inscription reads "Mellonath Tolchin Ellennin"

It started as a semi-official website intended to promote The Lord of the Rings (film series) for the Greek audience by hosting a forum; eventually it evolved into a full-functioning society in October 2002.

The society was unofficially divided into two "smials", one in Athens and one in Thessaloniki (and all northern Greece).

Some of the activities of the GTS have been the issues of the News from Bree fanzine, as well as co-operating for the subtitlization of The Lord of the Rings: The Return of the King in Greek theaters. Also, the Society participates in the International Tolkien Fellowship and its members are often present in Tolkien events over Europe.

In October 2007, the GTS hosted the first overboard Tolkien gathering on Greek ground on the island of Andros with Marcel Bülles chairman of the German Tolkien Society and Caspar Reiff of Tolkien Ensemble as special guests. The happening was conveniently named "Cair Andros".