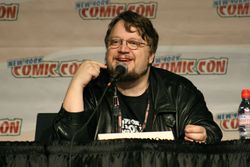 Guillermo del Toro (October 9, 1964) is an Academy Award-nominated Mexican director. He was originally set to direct The Hobbit (film series), but dropped out after legal matters delayed the shoot. He remained as one of the writers, though and is credited as one of the screenwiters in titles of the film series.

Del Toro is known for his imaginative visuals; his major works include comic-book adaptations Blade II and Hellboy, and the critically acclaimed El Laberinto del Fauno (Spanish, lit. The Labyrinth of the Faun. Released in English-speaking countries as Pan's Labyrinth).

Although he has stated he 'loved' The Hobbit, Del Toro's lack of knowledge about Tolkien's works has already worried some fans:

"I tried my best to read Lord of the Rings [sic], the trilogy. I could not. I could not. They were very dense. And then one day, I bought The Hobbit. I read it and I loved it."[1]

When asked to what extent has the work of Tolkien influenced him:
"Not at all. I could barely finish "The Hobbit". Curiously, that kind of fantasy, never called out to me. I think that fairy tales are in themselves a different genre. Heroic fantasy, in general, leaves me cold. I am more interested in Robert E. Howard's work of terror than his novels about the muscular Conan. Although there are two writers of fantasy that I think are sublime: Clark Ashton Smith and Lord Dunsany. [Translated from Spanish]"
― Guillermo del Toro [2]

"I was never into heroic fantasy. At all. I don't like little guys and dragons, hairy feet, hobbits -- I've never been into that at all. I don't like sword and sorcery, I hate all that stuff."
― Salon.com, October 2006 (Interview from May) [3]