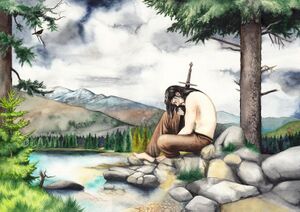 Laer Cú Beleg was a song that was made by Túrin in memory of his friend Beleg Cúthalion.[1]

With the aid of Gwindor, Beleg freed Turin from Orc captivity during a thunderstorm. Upon being freed, however, Turin accidentally mistook Beleg for an Orc and murdered him with Beleg's own sword, Anglachel. Upon realizing the horror of what he had just done, Turin fell into a frozen state of shock and allowed himself to be led by Gwindor to the Pools of Ivrin. Once there, he drank from the pure waters and was healed. After which, he cried in tears, mourning Beleg. Then he composed and sang a lament as a form of release in his grief, singing it aloud regardless of peril.[2]

The concept of Túrin composing an elegy for his friend is present since early stages of the legendarium. Appears for first time in The Lay of the Children of Húrin, in which it is called the Bowman's Friendship, and it is said that the Gnomes remembered it in Nargothrond and was a song used in battles against Morgoth.[4] The same name is given to it in the following versions of the story in the Sketch of the Mythology[5] and the Quenta Noldorinwa.[6]