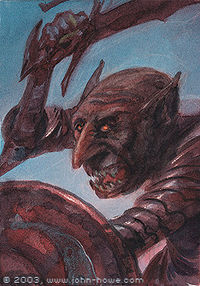 Lagduf (late Third Age) was an Orc soldier who served under Shagrat in the garrison of the Tower of Cirith Ungol. During the War of the Ring, a riot broke out in the Tower with a rival band of orcs from Minas Morgul. Lagduf attempted to escape with another Orc named Muzgash, but they were both shot as they ran from the fortress.[1]

The earlier form of this character's name used by Tolkien was Laghorn.[2]