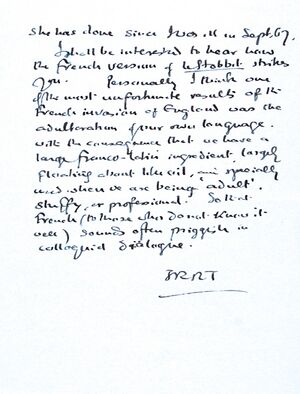 Autograph letter, discussing a misunderstanding, recent health issues (Tolkien's wife's and Amy Ronald's), and discussing a translation of The Hobbit, "I shall be interested to hear how the French version of Le Hobbit strikes you. Personally I think one of the most unfortunate results of the French invasion of England was the adulteration of our own language. With the consequence that we have a large Franco-Latin ingredient, largely floating about like oil, and specially used when we are being 'adult', stuffy, or professional. So that French (to those who do not know it well) sounds often priggish in colloquial dialogue".[2]