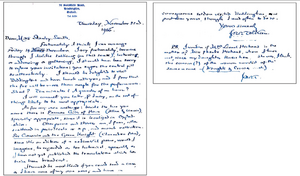 Fortunately I think I can manage Friday 14 Nove December. I say ‘fortunately’, because though I dislike talking (in this sense), lecturing, or addressing a gathering, I should have been sorry to refuse your invitation: you sugar the central pill so attractively. I should be delighted to visit Deddington and have lunch with you; and I fear that the fee will be more than ample for the performance. Short? Ten minutes? A quarter of an hour?

I will consult you later, if I may, on the sort of thing likely to be most appropriate.

As for my own writings: beside the two you name there is Farmer Giles of Ham (Allen & Unwin), specially appropriate, since it is localized in Oxfordshire. Other poems and stories are, I fear, either scattered in periodicals or o.p.2 and await collection. Sir Gawain and the Green Knight (Clarendon Press), since it is an edition of a mediaeval poem, would, I imagine, be regarded as too technical, specially as I have not yet published the translation which has twice been broadcast.

It would be most kind if you could send a car, as I have none of my own now and have in consequence seldom visited Deddington, in post-war years, though I used often to do so.

P.S. I wonder if Mrs. Lionel Hitchens is the mother of Miss Phoebe Hitchens, whom I have met, since my daughter knew her. She was, I think, the cousin (?) of the woman novelist of the same name - (Noughts and Crosses …etc.).
JRR T.