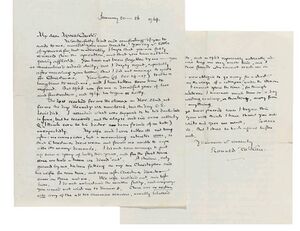 'A DREADFUL YEAR OF LOSS AND FRUSTRATION': on the death of C.S. Lewis and the 'simultaneity of different planes' in The Lord of the Rings. Tolkien responds to a sympathetic letter from his correspondent to pour out a tale of 'a dreadful year': 'The loss reached for me its climax on Nov. 22nd, not for me the day Kennedy was murdered, but the day C.S. Lewis died'; then, Tolkien and his wife were so ill as not to be able to celebrate Christmas; the next disaster was in their son Christopher's divorce -- 'A shadow, only guessed by us, has been falling on my son Christopher and his wife ... soon after Christmas disaster came on them and us. His wife walked out ... I fear they have left their allegiance to our Mother [the Church]'. The letter continues with a detailed discussion of The Lord of the Rings, considering Mroczkowski's suggestion as to 'the simultaneity of different planes of reality touching one another ... part of the deeply felt idea that I had ... Beyond that too I feel that no construction of the human mind, whether in imagination or the highest philosophy, can contain within its own "englobement" all that there is ... There is always something left over that demands a different or longer construction to "explain" it ... This is like a "play", in which ... there are noises that do not belong, chinks in the scenery', discussing in particular the status of Tom Bombadil in this respect. The letter concludes with apologies if this seems too earnest, and references to his wife's ill-health.